I don't know about you, but I was terrified by a cartoon movie when I was a kid that had blood thirsty killer rats in some of the scenes.......the movie.......Footrot Flats. I still remember being terrified of these cartoon rodents, before "Horse" the cat arrived and taught them a lesson. That's my memory of killer rats, but there are 100's of movies that have used rats as the nasty component in the film.

It seem now that scientists have actually created rats that are particularly scary. They may not be blood thirsty or "killer", but nonetheless, anything described as a cyborg tends to send chills down the spine. 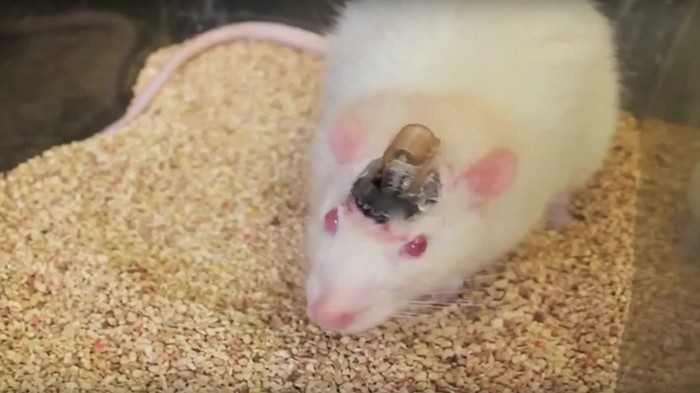 Apparently, using electrodes that were implanted in the brain of the rat, the researchers were able to control the movement of the rodent via brain-machine interfaces (BMIs), and a human manipulator could control the movements of the animals. What was achieved was somewhat stunning. The researchers indicated that if they moved their left arm, the rats were compelled to turn left when navigating a maze, and vice versa when the researcher moved their right arm.

The research has implications in prosthetic applications for example, with humans being able to control prosthetics with a simple thought. Going further, the researchers suggest that:

"In the future, the Zheijang researchers hope that “information flow will be made bidirectional and communicative between two human individuals.”

What Of The Future

Certainly all of this begs the question about how far away is humanity where humans wills be able to control other humans via mind control. It's a scary thought, almost as scary as blood thirsty rodents.

University of Washington brain researcher Andrea Stocco says there is nothing to worry about....yet.

“We are very, very far from any application of these technologies on humans against their will,” he says. And anyway, it’s not like we need BBI to manipulate people even now. “Scandals like Cambridge Analytica remind us that social media feeds and advertisement campaigns are just the good old-fashioned way to achieve the same goals (making other people do something they wouldn’t do otherwise).” So really, this research is just bringing up some of the same old ethical dilemmas we should already be used to dealing with."

Cockroaches Have Also Been "Mind" Controlled

Interestingly, this is not the first time scientists have control the minds and movements of other living beings. Back in 2015, scientists created a swarm of "robo roaches" at the North Carolina State University. In this experiment, placing an array of microphones and electrode sensors onto a small circuit board, they've created what they call a "backpack" to be worn by Madagascar hissing cockroaches. The backpacks pick up sounds and help control the insect's movement. A researcher uses a joystick to steer the roach toward the sound source.

Here is a video explaining the process and experiment:

If you believe you have rat or cockroach cyborgs, we may or may not be able to help you. If you have the standard run of the mill rat infestations or cockroach infestation, we certainly can help. Give us a call or visit our service pages for further information.